I have three very important questions for you:

If you answered yes to these questions then have I got the blog post for you!

Featuring multiple contributions from theatre fans across the globe, here is your number 1 place to go for an awesome theatre-inspired Halloween costume!

With Hamilton being one of the most popular mainstream shows at the moment and with multiple amazing characters to choose from, the ideas for Halloween are endless! The costumes in Hamilton are so stand-out that you’ll easily make a great impression. 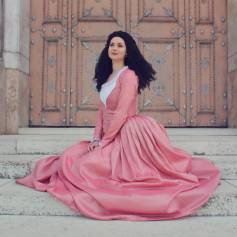 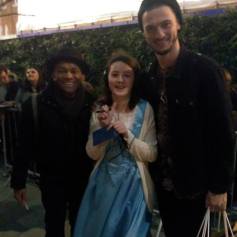 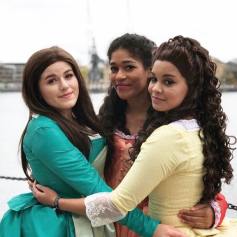 Savannah Wild and friends as the Schuyler Sisters

The Schuyler sisters are a great choice to go for this Halloween, whether getting two of your best girlfriends together or choosing your favourite sassy 18th Century sister to go as on your own!

This stylish velvet jacket and beautiful lace collar says nothing but Jefferson, am I right?! This idea was from @imijean on Instagram and I’m honestly so in love with both the costume and the way she plays the part!

We certainly can’t forget about the main man himself – Mr Alexander Hamilton.  Here is 12-year-old Sam J Scott giving his best A. Ham! A lovely waistcoat, tight beige leggings, shin-high brown boots all paired with a blue velvet coat and you’ve got Alexander Hamilton perfectly for this year’s Halloween! 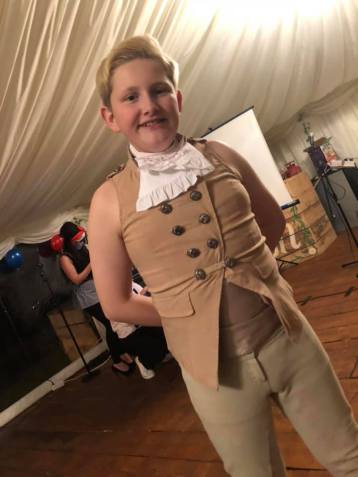 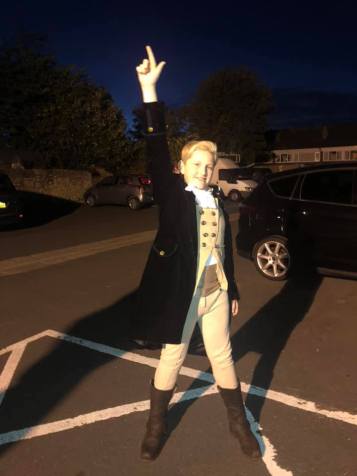 Let’s also not forget that the Hamilton ensemble costumes are nothing to forget. This amazingly designed and modelled costume is by Sharon Dunsford who proves that anyone and everyone can be a part of Hamilton this Halloween (or at any time that permits a bit of dressing up!) Quite a simple yet intricate costume which mirrors the West End and Broadway costumes so well! Great idea and contribution from Sharon!

Similar to Hamilton, Heathers is a great show to dress up as either on your own or with a group! As you can see from below, this group of Pagen Hall (plus many friends) came as nearly the whole cast when seeing the show a few weeks ago:

All you really need to master these costumes are blazers in red, yellow and blue with matching skirts, knee-length socks, a scrunchie to match your blazer and a croquet stick! Oh, and don’t forget to take a picture like the one you see here and have the girl in the red blazer in the middle!

Heathers is a great one for Halloween, because unlike a lot of musicals and recommended costumes/characters to to as, the plot of this musical is actually Halloween appropriate! This means it’s totally acceptable to go as either of the lovers of the story: a creepy J.D (modelled here by @phantomtea_cosplay on Instagram) or a Veronica with a vengeance on your own, without the need for a sassy backup crew! 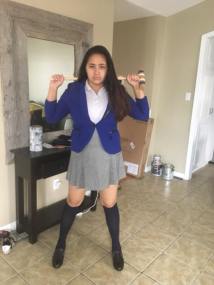 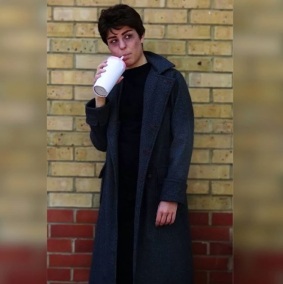 @phantomtea_cosplay as JD from Heathers 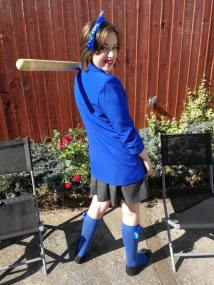 Here we have some great examples of how you can be some of the characters from the longest running musical in the West End: Les Miserables.

First off we have the lovely Eponine who is nicely characterised by her long brown trench coat, flat cap, white shirt and belt. Cover yourself with a bit of brown makeup for the mud (or red makeup if you wish to be dead Eponine!) Absolutely loving these contributions from Chloe Rolls, Ginevra Servi and Rae Bromley! 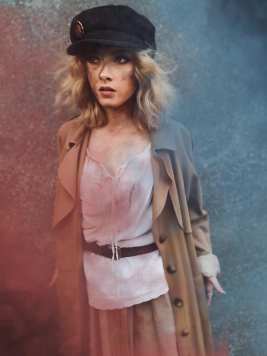 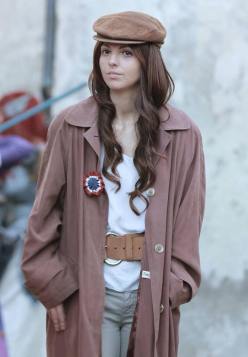 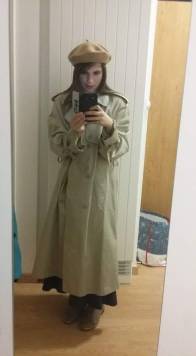 Another great costume to try out this year is the leader of the French revolution, Enjolras. This costume can be put together with a yellow waistcoat, a white shirt, black trousers and donning some of the classic French red, white and blue colours in a rosette or belt as @libertyxjustice has done here!

(and often misunderstood) Javert. I think it’s up to you how much detail you go to with this costume which will make it either quite simple or a bit more of a stand out costume! The easy way would be to find and wear a button-down blue/navy trench coat, matching trousers, black boots and sport a black truncheon. Clearly here, Jigget Cosplay (plus Robert Johannesson Photography) has taken this costume to the next level, sporting a great Javert wig, gloves, wearing the PERFECT coat and don’t even get me started on that Javert glare!

I think the obvious answer is Elphaba for this theme! Perfect for Halloween and instead of saying you’re just a bog-standard witch, you’re the star of the hit musical Wicked!

These two ladies have really nailed the Elphaba-esque in their costumes.

Now I’m not sure about the other contributions in this piece but I know for a fact that this amazing Elphaba costume you see here is completely hand-made by Jamie-Leigh Currie for her 21st birthday. As you can see, this costume is a lot more intricate than the basic witch costumes you buy from local party shops. As with the Javert costume, though, you can definitely still be an amazing Elphaba if you don’t have these amazing sewing skills or more money in the budget for a multi-cloured Elphaba costume: a plain black dress and green makeup would definitely still tell people who you were! Just don’t forget your broom!

I think what’s important to remember when greening up is not to just paint your whole face the same shade of green, but give it some contour and shading to look as effective as possible – really great from Amanda Pelling.

And you certainly can’t have an Elpaba without her Glinda! Either find someone to be your other half or pick your favourite witch for the evening! Can we just take some time to appreciate this amazing Glinda costume from @katrix_media on Instagram?! This costume is definitely one of the most intricate I’ve seen, right down to the tiara! I personally don’t know how you’d made a Glinda costume without going to extremes such as this to make it really obvious who you are, so maybe only go for this one if you have the time and resources to really pull it off!

Not going to give suggestions from one specific show this time, but some great pair costumes you can do with a partner or friend!

The first of these is a classic musical couple that would make for a perfect Halloween pairing. Here we have Hannah Aurora as Christine Daae and @phantomtea_cosplay as the Phantom from, yep you guessed it, The Phantom of the Opera! 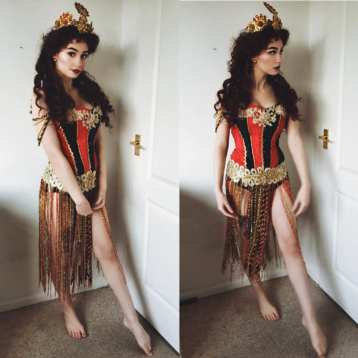 Hannah Aurora as Christine Daae from The Phantom of the Opera 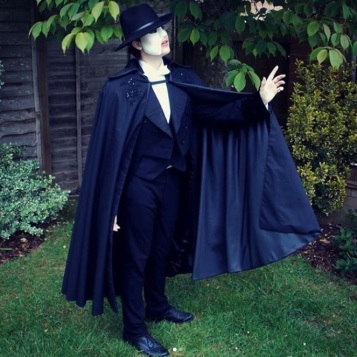 @phantomtea_cosplay as the Phantom from The Phantom of the Opera

Both these contributors have definitely gone ALL OUT for these costumes, so this couples idea might be best if you have the time, resources and effort to put these costumes together! I really admire the creativity shown here though!

Another, yet slightly simpler, idea is portrayed here by friends of Jamie-Leigh Currie. These two lovely characters are the fabulous Sally and Emcee from Cabaret. A great way to bring some of those1920s vibes to this year’s Halloween and bust out your best Charleston while adding a touch of class to your party!

So you know SO MANY people go as boring cats for Halloween, right? Wearing all black, cheap rubbish cat-ears from Primark or the joke shop and with a bit of eyeliner, draw on some whiskers and colour-in the end of their noses, all I can say is BOR-ING. If you want to jazz up your feline costume next year, why not take it to the next level and go full on extra as a cat from Andrew Lloyd Webber’s Cats?? 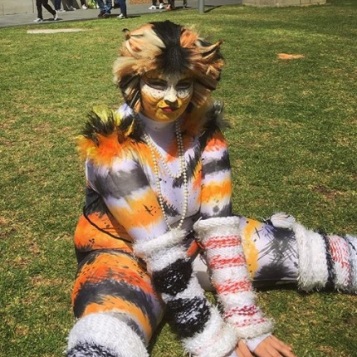 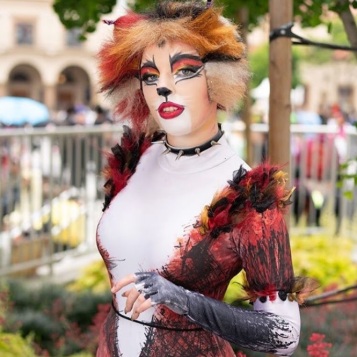 @roseygcosplay as Macavity from Cats

Seriously, look at these absolutely uh-mazing costumes! On the left we have @cararosecos and on the right we have @roseygcosplay (both from Instagram), proving that going as a cat for Halloween doesn’t have to be boring or mainstream! I think this would be a great costume to do with a friend or partner and go ALL OUT for!

Final suggestion for a couples costume which is VERY Halloween appropriate is to go as characters from The Rocky Horror Picture Show! A sexy and sassy doubles costume, going as Magenta and Frank’N’Furter will definitely get people’s heads turned on Halloween! Though I must advise that if you do go as these costumes, as displayed by Alice Gulliver and her friend here, you have to really WERK IT. This costume – especially Frank’N’Furter is not for the faint-hearted!

First off we have the inevitable Sweeney Todd, masterfully done by @drewyth here! While the costume seems to be great, what really makes this Hallo-sweeney costume (see what I did there) is the makeup. With the light face and dark features, plus dark hair, this really brings across the creepy and mysterious feel to the character and show of Sweeney Todd: The Demon Barber of Fleet Street.

Another great suggestion for a “scarier” Halloween theatre suggestion is to go as either a character or characters with your friends from The Addams Family! Below we have contributions from Kenzie May Barraclough who sports the classic black-plaited Wednesday Addams wig and a great scary look to match! On the right is a contribution from Jennifer Hills and her family who have done an amazing joint effort to go as the ENTIRE Addams Family! I love this family spirit and only wish my mum had organised similar things for me! 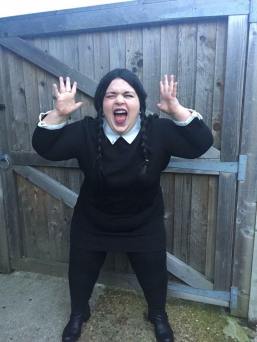 Kenzie May Barraclough as Wednesday Addams 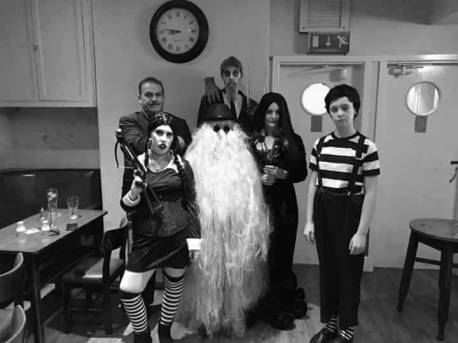 Jennifer Hills and Family as The Addams Family

With Mary Poppins returning to the West End next year and the arrival of the new film soon, Madison Murphy has got the right idea of dressing up as this lovely character! A really nice costume, plus Madison says she uses the big bag to put all her sweets and candy in, PERFECT!

A really funny one to go as this Halloween, following the opening of the tour earlier this year is King Julien from Madagascar: The Musical. No, I’m not kidding. This would definitely go down in your Halloween party history and have people talking for ages! @beebinch on Instagram knows exactly what she’s doing in creating this look and honestly it’s one of the most creative and funny Halloween costumes I’ve seen in a long time! You’ll definitely be singing “I like to move it move it” all night though!

My ultimate and final suggestion for Halloween this year is from a childhood classic Disney film that was only ever performed in the US, is from The Hunchback of Notre Dame. The character of Esmerelda is a really stand-out costume and really original as well I think! @charleycosplayz on Instagram has an amazing replica of this costume and even has the performance skills to match! I think the accessories including the pink hairband, the bangles and the sarong are what make this costume so stand-out. I really love this idea for a costume and think even if people didn’t know the musical they would recognise this iconic costume from the well-loved Disney film.

So there you have a pretty extensive list of musical characters to give you some inspiration for this Halloween! Thank you to everyone for your contributions and I’m sorry I couldn’t use them all in this piece!

Let me know which of these suggestions is your favourites, feel free to add any more contributions and let me know what you’ll be going as this Halloween! 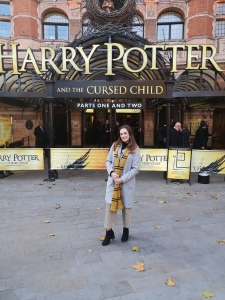